In Dakatcha woodlands creation care and new livelihood opportunities has shown its potential, in an A Rocha project funded by Tearfund. Read about some of the people and communities that have been transformed.

Since February 2016, A Rocha Kenya in partnership with Anglican Development Services-Pwani (ADS-PWANI) and Farm Concern International (FCI) have been working on a two year project funded by Tearfund.

The main goal of the project was to enhance the livelihood and creation care through transformed lives of communities both in Palakumi, Ganze sub-county and Dakatcha, Magarini sub-county. The project had four main objectives which include, inncreased crop and livestock production, transformed communities embracing Christianity and Christian world view and ecological integrity

A Rocha Kenya implemented the project in Dakatcha while ADS Pwani did it in Palakumi. FCI was contracted to link our farmers with market. 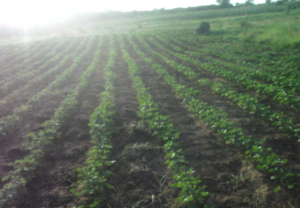 Our project focused on drought resistant crops – like cow peas and green grams.

Many Magarini sub-county communities have resorted to massive charcoal burning jeopardizing biodiversity in Dakatcha woodland. Our project focused on drought resistant crops – like cow peas and green grams – that can grow in Dakatcha and Palakumi areas. Market was provided to enhance increased incomes to farmers.

One of the farmers who have hit the ground with thud is Phillip Kazungu Wanje from Mulunguni village. His first encounter with trainings on market led green grams production sparked a glimmer of hope and the start of self-employment to cater for his family needs. Seated in a group of farmers, he keenly paid attention to all the crop agronomic details unveiled by the trainer and chose to give it a trial. He later went to the market and bought 3 packets of green grams enough for one acre piece of land. 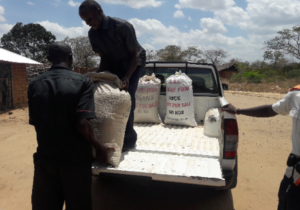 For Phillip Kazungu Wanje 3 small packets of green grams became a harvest of 253 kilo one acre piece of land.

He harvested two hundred and fifty three (253) kilograms of green grams the minimum yields per acre in an ideal situation despite rainfall inadequacy.

Phillip can now take his daughter to secondary school and restock his retail shop after selling his produce worth Ksh 20,240. He currently stands out as an inspiration to his group ”Umoja silk” and other farmers in the community. “I’m glad for this life changing encounter, a potential solution for boosting my income to cater for my family needs”, Phillip says.

Could his testimony inspire the rest of the community members to adopt market led agriculture and stop destroying their environment? This must be a transformational story in making!

To increase livestock production, the project focused on encouraging farmers to rear indigenous chicken for sale. One of the farmers that has shifted to poultry, is Peter Kombe, 51 years old and the current assistant chief of Wakala Village. Peter is married to Helen Charo, and they are blessed with one child. 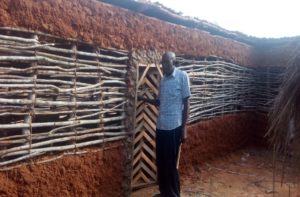 One of the farmers that has shifted to poultry, is Peter Kombe in Wakala Village.

Peter tells that he had always had some qualms on chicken rearing, but little did he know that his diminished confidence was caused by lack of knowledge in this feasible enterprise. Together with his wife, they made deliberate effort to ensure that they attend all the trainings conducted by the officers.

One of the farmers that has shifted to poultry, is Peter Kombe in Wakala Village.They started with eleven (11) hens and three (3) cocks. In his first phase of interaction with the trader, he was able to sell 35 indigenous chicken worth Ksh 12,400. Mr. Peter could now pay his child’s college fees. This restored a glimmer of hope in the family and sure enough, Peter chose to construct a more spacious, well designed chicken house where he can keep up to 250 birds.

Peter says: “I’m happy for such a life changing encounter that when I felt a loser, my hope was restored. Am transformed and being at the helm of leadership in my village, I stand a good chance to cause transformation to my people by getting more involved in better farming and proper husbandry.”

A Rocha Kenya engaged 17 schools in both Dakatcha and Palakumi areas in environmental education. Churches were also brought to speed with their role in conservation through creation care teachings.

Could A Rocha Kenya’s efforts inflate a balloon of hope in the young generation? Perhaps yes to a certain degree. For instance, Nyamalasinene primary school in Adu location in Magarini sub-county, a small school with an enrolment of 300 pupils could beat all the odds in a span of five months of immense transformation and emerge environmental champions for the year 2016. 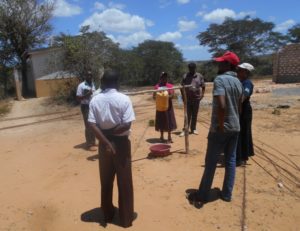 A one day workshop greatly inspired Mr. Mwagandi and Mr. Karema, the school wildlife club patron and co-patron. The patrons successfully diffused clinical interest and amazing zeal in environmental conservation among the pupils in their school. This saw the previously unkept school compound attractively beautified, hand-washing tippy taps for boys, girls and teachers installed close to their toilets for proper hygiene and sanitation, 5 tortoises threatened by the community secured, program for  environmental education sessions well planned and endorsed by the school management paving way for more trainings by A Rocha Kenya.

Mr. Mwagandi, the club patron describing the experience: “It’s not the size of muscles that makes a hero but the courage, self-believe and determination. This is just a beginning, there is a lot in store.”