For our May Bioblitz in the Dakatcha Woodlands, a team of bird, insect, and plant experts spent 5 days in the Southern sections of the Woodland conducting biodiversity surveys. In addition, we are using camera traps to monitor wildlife in various sections of the Woodland. The objective is to develop our understanding of biodiversity in area, which in turn helps us to identify and prioritize which land to purchase and protect.

This month, our cameras had a few surprises in store for us! Below, we share 3 findings we were particularly excited about. Ready for a Dakatcha-safari?

The globally Endangered Golden-rumped Elephant-shrew was the most popular species this month, making an appearance on 5 of our 8 camera traps! This is hugely encouraging, and gives us a wealth of data to base our land purchase strategy on. 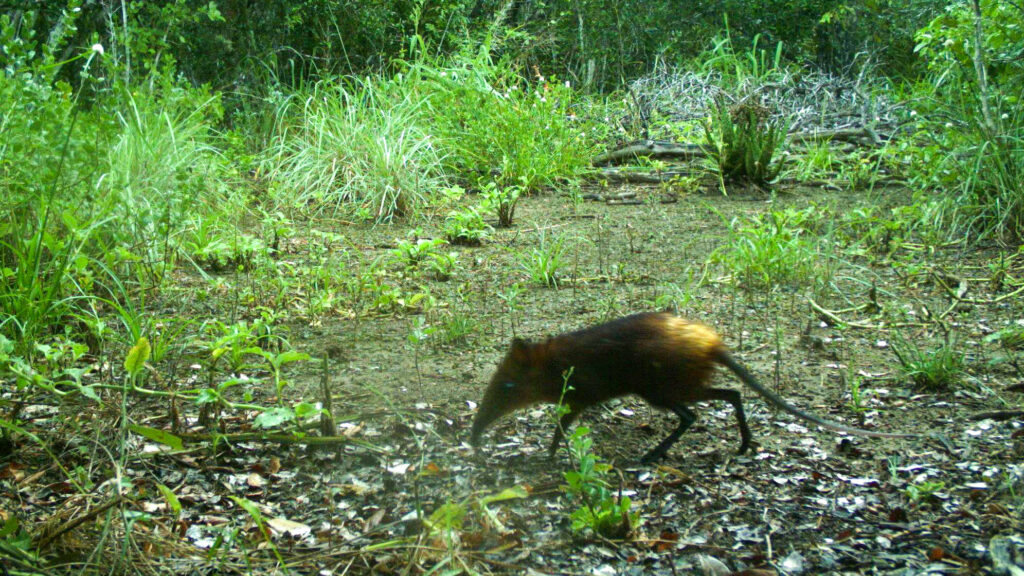 The globally Endangered Golden-rumped Elephant-shrew was spotted on 5 of our 8 camera traps last months! A new record!

This was the next big surprise… Can you tell what it is?? 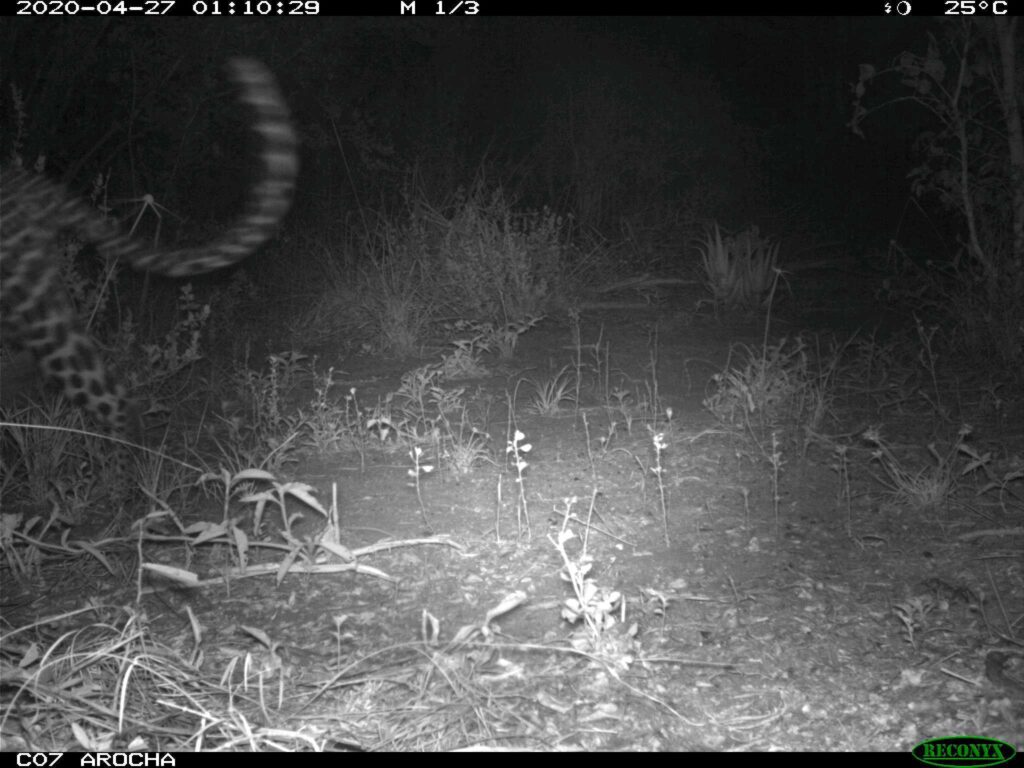 Just a leg and tail… enough to confirm it is a Leopard!

We were very excited to identify, for the first time in our camera trapping in the Woodlands, a leopard! This species is classified as Vulnerable by the IUCN, with a decreasing population trend. Though this species was never spotted in Arabuko-Sokoke Forest, it recorded several times further North in Boni-Dodori Forest (North Coast), on camera trapping surveys conducted by the Zoological Society of London (ZSL) in 2010 and 2015. This adds yet another species to our Dakatcha Red-Listed species list – now including 2 mammal species, 2 trees, and 9 bird species. 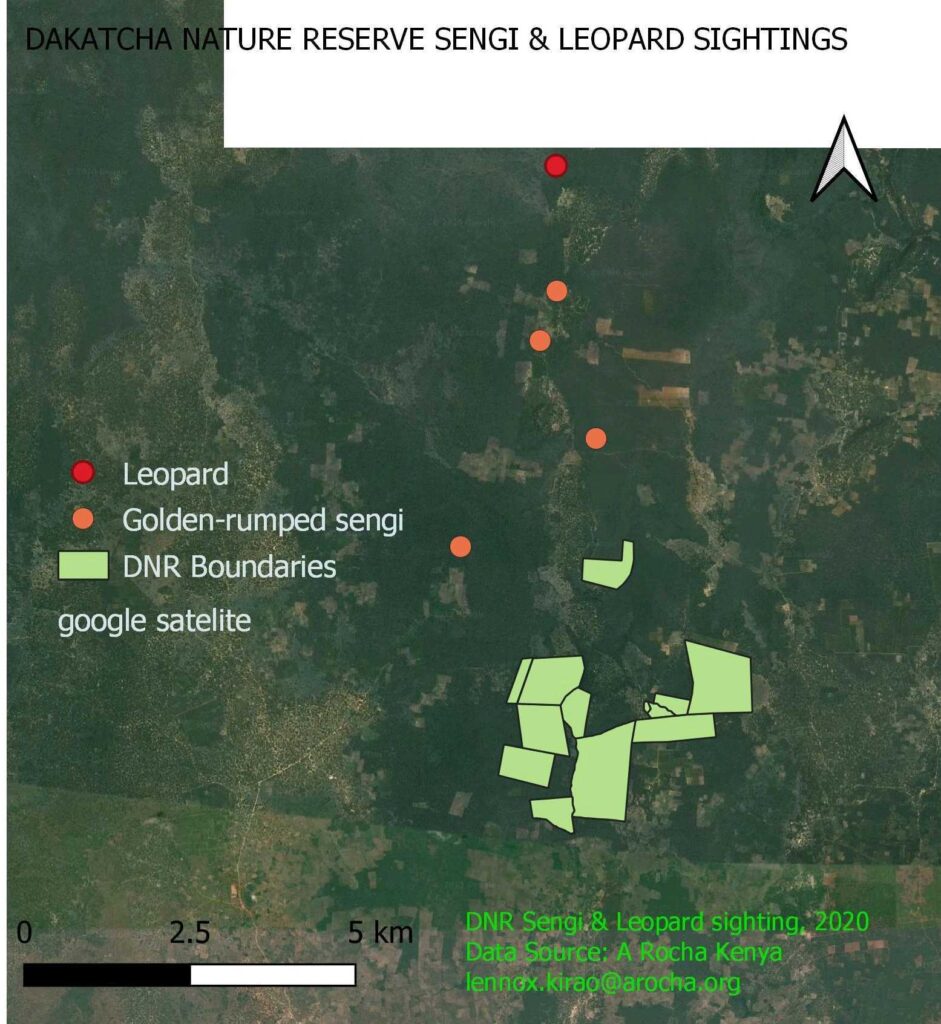 Our camera trap sightings inform our land purchase strategy, as we seek to identify priority land to buy and protect.

Last but not least… Can you recognise this wild cat? 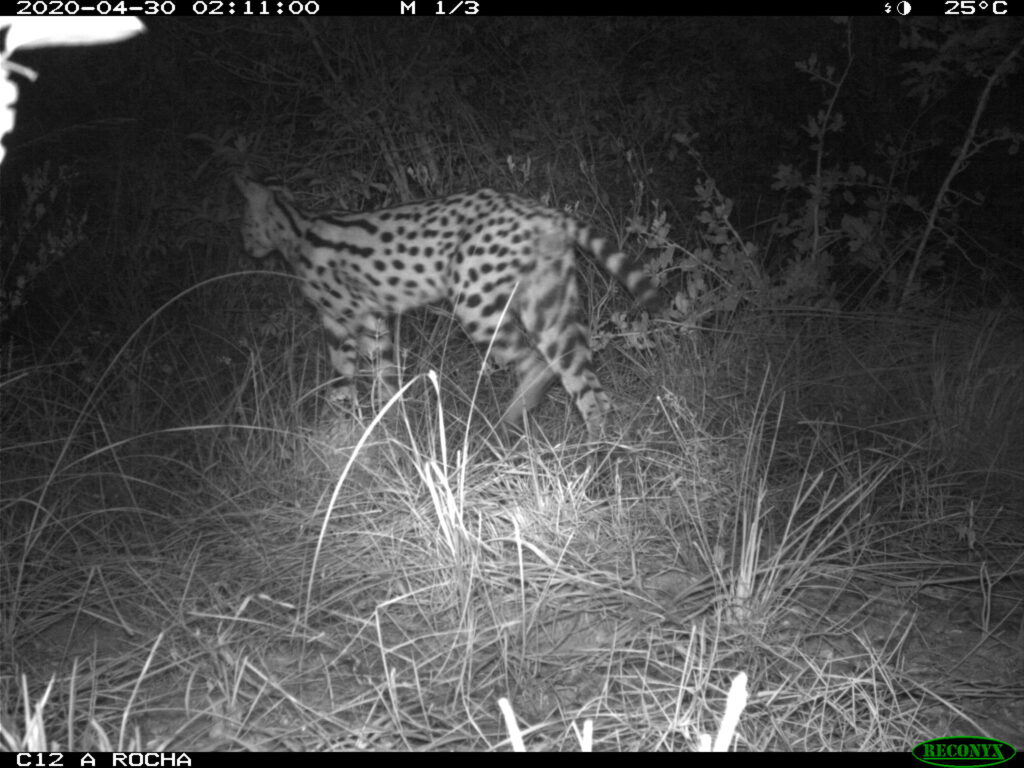 A serval! Did you know they have the longest legs of any cat, relative to their body size?

This is our first shot of Serval in the Woodland… and possibly a first for the Coast?! In over 4000 hours of trapping, the camera trap surveys conducted by the ZSL in Arabuko-Sokoke and Boni-Dodori Forest didn’t record a single Serval…

Want to continue the safari? Here are few bonus ones 😉 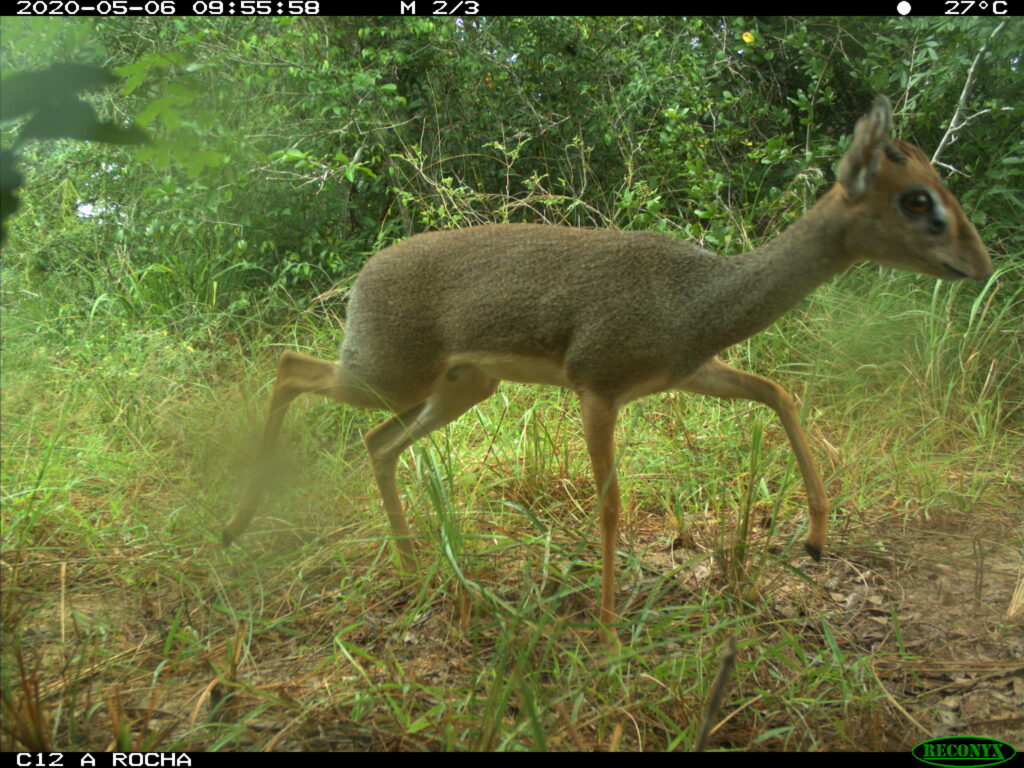 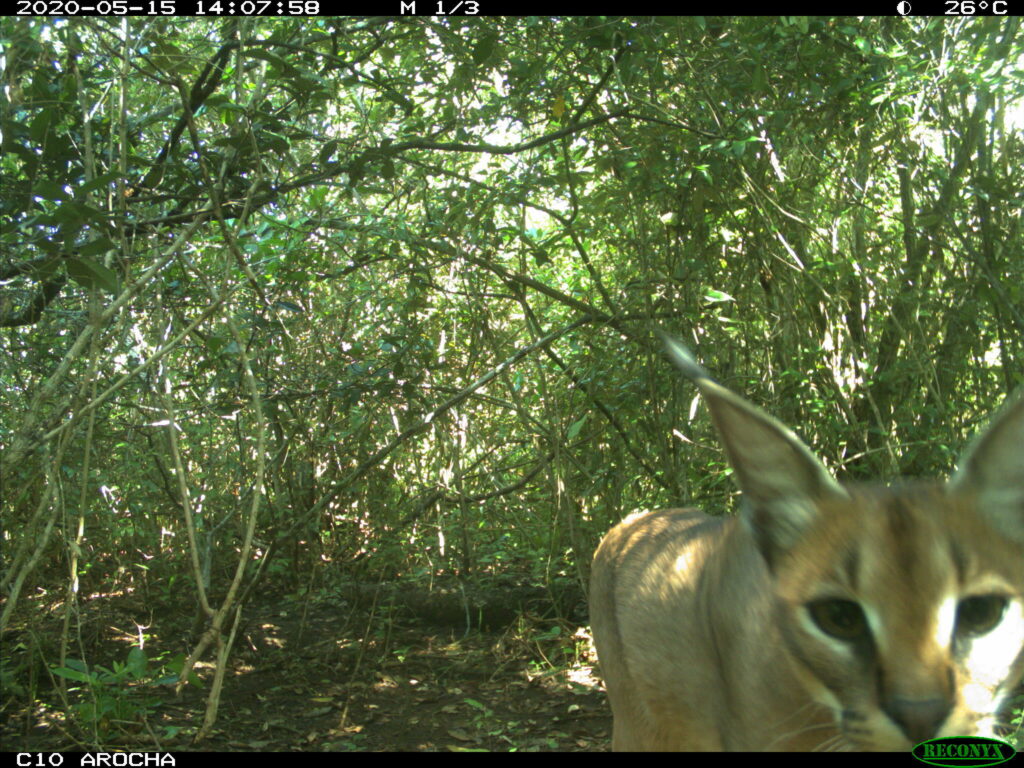 On a sadder note, charcoal burning is intensifying… 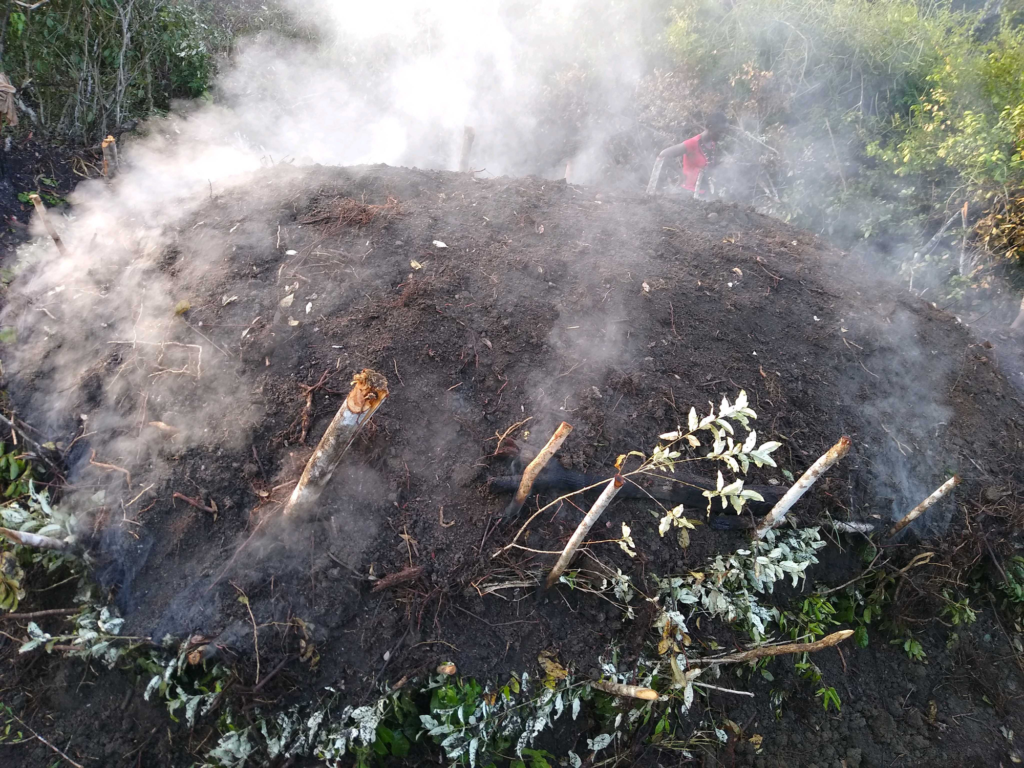 Charcoal burning is intensifying in the Woodlands. It is urgent to continue our land purchase efforts to protect this forest against irreversible damage.

The team noted that charcoal burning was being carried out at alarming rates in Dakatcha: “The forest is on fire“, said Kirao on his return. Most charcoal burners are not locals, but come from further South on the Coast. They compensate locals with a small amount to cut down trees on their land. The economic insecurity of local communities makes them vulnerable to such disadvantageous offers, and the forest is paying a high cost.

This only confirms how urgent it is to take action to safeguard this key habitat home to many species, a high number of which are endemic or Red-Listed. In the face of this urgency, land purchase is the most efficient approach to secure a core reserve in this landscape. This is confirmed by the fact that our current reserve is well-respected and intact, while other areas are being destroyed and burned down.

If you wish to support our land purchase efforts and help safeguard Dakatcha Woodland, you can make a donation here: https://www.arocha.or.ke/thank-you/