“Fireless cooker?” Seriously? Yes – the cooker itself has no flame or fire and yet your food cooks perfectly. It is a method that is used to vastly reduce the amount of fuel needed to cook a wide range of foods that are cooked in a saucepan. Like beans – which take a long time and therefore normally use a lot of fuel. Or rice – which can never burn in a fireless cooker. 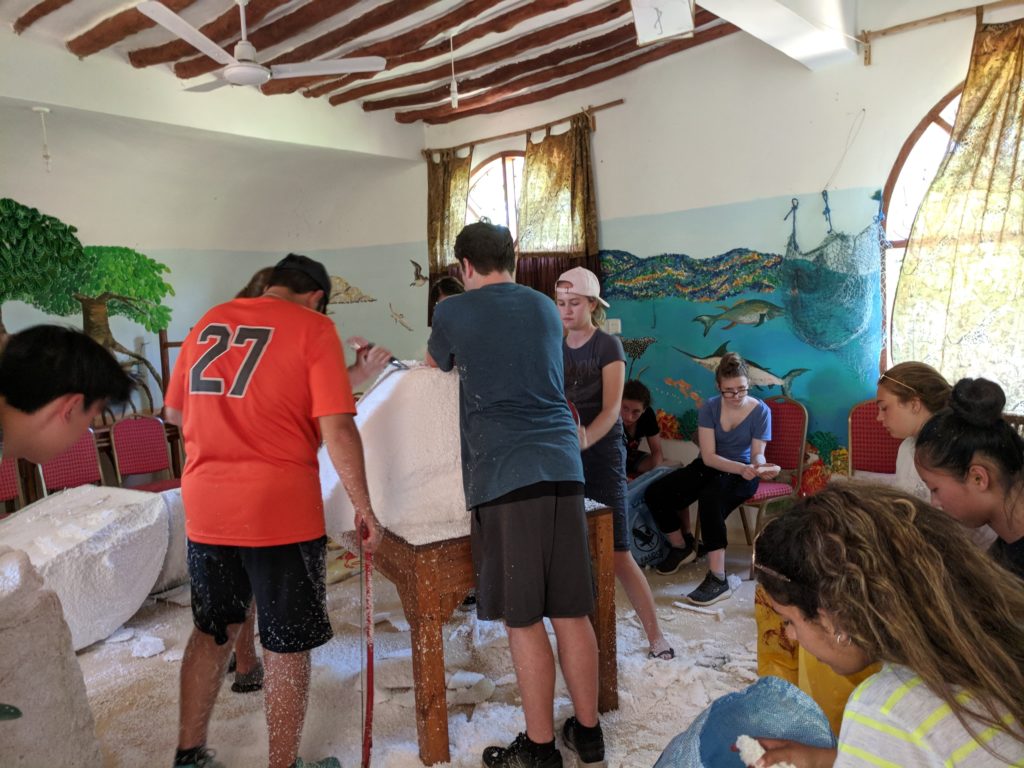 Volunteers helping to break down the polystyrene

Not only does it save on fuel, but it also helps your health since you don’t have to stay in a smoky kitchen for hours waiting for your food to cook. Yet again, while it might take longer to actually cook food, it also saves on time: since there is no fire to be careful of, you don’t need to stay and watch it. Instead you can do other things as the food cooks and, remember, you are guaranteed that it will not burn.

How does it work? You bring your rice to the boil on a ‘normal’ stove, then once it starts to boil you turn off the stove and place it in an insulated basket, the fireless cooker, and let it’s own heat do the rest!

Washed up on the beach in front of Mwamba a couple of years ago was a 3 m long by 1 m round float made of Styrofoam (polystyrene). Since it was found, it has been kept in the kid’s corner at the centre since we didn’t really know what to do with it. Being so light it is not viable to recycle; it is non-biodegradable and there really is not much re-use for it. However… having good insulation properties and copying a design we found in Cape Town, we thought why not turn it into the insulation for fireless cookers?

However, breaking it up into tiny pieces proved far harder work than we had imagined! Thus, when in July we had a group of 20 energetic Canadian high school students visit, we put on the music, broke out the Styrofoam float and set to! It’s amazing what some enthusiasm (and good music!) can do…

For many of us at Mwamba we had just heard it said that the cooker can actually cook – but we had never actually tried it out (and secretly didn’t believe it!). We’d had one that was just used to keep the food warm (which worked fine) but not really to cook in it. So we gave it a try (with a portion of the rice) and to our ‘amazement’ it did work. We brought a pot of rice to the boil, then put it in the fireless cooker and after 40 minutes our rice was perfect!

Our staff are gradually warming up to the idea and more fireless cookers are being made. We are using the Styrofoam, but a wide range of insulating material can be used. The cookers can also come in different shapes and sizes to fit the cook’s need.

It may be early to talk about Christmas but what better present to give than a beautiful fireless cooker?! Especially for those who spend long hours in smoky kitchens and / or many hours collecting firewood. It’s a win-win option since not only does it have all the cooking benefits, it then ultimately helps us conserve our forests from destruction for fuel-wood and charcoal.