THE NOT SO SILENT REEFS

Did you know that coral reefs are not as quiet as they seem. There are various sounds that are produced by the many creatures found in the reef from parrot fish scrubbing the substrates to shrimps with their pincers and sea urchins eroding the calcium carbonate. But just in case you thought the sounds were to entertain snorkelers and divers think again. Actually most snorkelers and divers are never keen enough to listen to the sounds. These sounds are very critical for the survival of some of the species living here. Take a clownfish for example; we know of their symbiotic relation with sea anemone. But did you know that the female clownfish lays its eggs on rocks beneath the anemone. 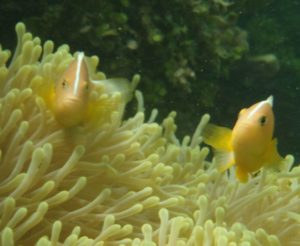 The eggs they hatch and the baby clownfish are released to the open ocean. After several weeks when they are grown they have to find their way to the home reef through the sounds produced by the reef creatures. If the reef is unhealthy there are less of these creatures and therefore less sounds making it hard for the clownfish to locate the reefs. Climate change and other anthropogenic are degrading reefs and making it hard for most of these spectacular species to thrive. New evidence of ocean acidification also suggests that the increasing acidity of ocean water may affect the inner ear of clownfish and making it even harder for them to hear the sounds and locate a healthy reef. Let’s play our role in keeping the coral reefs healthy and help Nemo locate home.