THE “RAIN FORESTS OF THE OCEAN”

Have you ever thought about the coral reef habitat? Coral reefs are rocky mounds and/or ridges formed in the sea by small animals known as coral polyps through the accumulation and deposition of limestone (calcium carbonate). The “rainforests of the ocean,” coral reefs are biodiversity hotspots that make up less than 1% of the marine environment but are home to 25% of the ocean’s marine life. Coral reefs are of great importance in the ecosystem. They are the second richest biodiversity of any habitat in the world, feeding grounds, nursery ground and shelter for many organism including turtles, sea snakes, triggerfish, parrotfish, nudibranchs (a colourful type of sea slug), crustaceans, hermit crabs and sharks. Aside from their stunning beauty and rich marine life, coral reefs provide protection to coastal communities from shoreline erosion and chemical compounds extracted from coral are used in medicine for cancer and other diseases. Coral reefs are threatened by pollution, careless boat anchoring, high turbidity from poor farming practices upstream and climate change causing coral bleaching.

Given this background, A Rocha Kenya’s marine research and environmental education teams saw it fit to develop a Marine Environmental Education Manual specifically tailored for the Watamu Marine Protected Area to create awareness and address the conservation of the aforementioned habitat and the rest of the marine ecosystem. It will be used by both teachers and students in learning more about their marine ecosystem, which they readily interact with and are dependent upon.  This was done in partnership with two other organizations which are; Local Ocean Trust: Watamu Turtle Watch and African Billfish Foundation together with the patrons to the environmental clubs selected from the eight schools that are part of the program.

The visits to the schools were interactive, fun filled and eye opening for the students, with the activity known as “the egg-carton coral activity” being intriguing and exciting. Through it the students could easily relate to how a coral reef is built, the two ways in which corals feed and how corals behave at night and during the day. Apart from the school visits, we invited one school for a rock pooling activity at the beach in front of Mwamba. It brought the students to attention about the diversity of life in the rock pools. 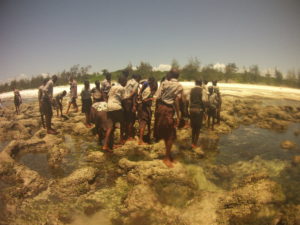 In order to create the much needed synergy between the organizations, students and the school, the teachers were also engaged through two workshops with the first geared towards disseminating as much knowledge as possible regarding the marine ecosystem. The second saw the teachers’ capacity built on how to conduct an environmental education lesson followed by familiarization and interactions with the marine biodiversity through various activities that they could adopt and practice them back at school with their clubs, such as crab surveys, beach sand art, making an organic tower, swimming, night rock pooling and a snorkeling trip to the Watamu coral gardens. 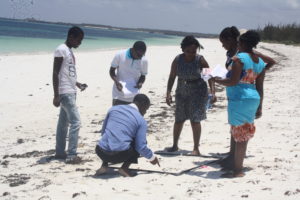