Around 25 people gathered at 6.30am on Saturday morning at the Kenya Forest Service (KFS) station in Arabuko-Sokoke Forest.

The mix of KFS staff, friends of the forest, members of the forest community association, birders, students, tour guides and wildlife experts, including plant and insect specialists, piled into three vehicles and drove to a section of forest near Mida Creek. Here, Kirao Lennox, who works in our Terrestrial Science Team, and is also an expert botanist and birder, led a free nature walk. 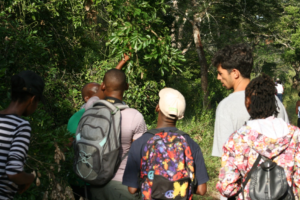 The Sokoke Six refers to six species of globally threatened birds found in the forest. Two of these Sokoke Six made themselves known on the walk.The Sokoke Pipit called and was visible to a lucky few, and a pair of Amani Sunbirds hopped from branch to branch in the treetops. The other Sokoke Specials are the Sokoke Scope Owl, Clarke’s Weaver, Spotted Ground Thrush and East Coast Acalat. 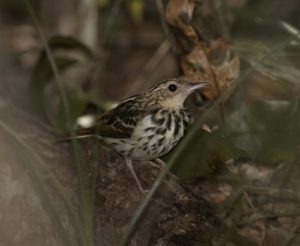 Amongst other things, the group learned how to tell male elephant dung from female, how to spot where elephants have scratched their shoulders, and the traditional uses of several trees, including the Grewia plagiophylla, which people plant sticks from to remember their ancestors, and the Haplocoelum inoploem, which is good for firewood and making fences. Finds included a lump of gum that looked like golden glass, a home for red-headed ants, and numerous butterflies. Experts pitched in as they found items of interest.

Following the walk, most of the group then continued on to Mida Creek for more bird-watching and a community meal. A great morning with one of the biggest groups yet! Interested in joining in next time? These walks take place twice a month on Saturday mornings from 6am. 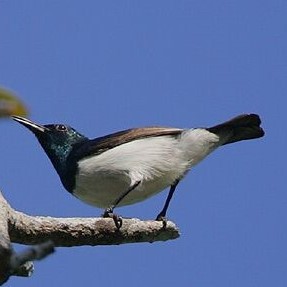 Kirao is a graduate of A Rocha Kenya’s ASSETS – Arabuko-Sokoke Schools and Eco-Tourism Scheme, which provides bursaries for secondary education for students living near the forest. The scheme had a “huge influence” on his decision to become involved in conservation, Kirao says, as he learned more about nature and realised that the message might be more accessible to the community if it came from a local person.