What do Australian wildfires and Red-necked Phalaropes on the coast of Kenya have in common?

An unusual observation during our annual waterbird counts sparked an investigation – connecting our sightings to a global phenomenon.

You’ve all heard of the unprecedented bushfires that ravaged Australia in 2019-2020. More than 42 million acres burned, billions of animals died, world heritage rainforests decimated – this large-scale disaster made the headlines for several months. But do you know what caused it? You may also have heard about the disastrous floods that affected over 700 000 people in East Africa, followed by locust invasions ravaging crops…

All these events can be traced by to a single phenomenon. Its name is IOD – the Indian Ocean Dipole, El Nino’s lesser-known counterpart in the Indian Ocean. Like El Nino, the IOD governs ocean currents and influences regional weather patterns through annual oscillations in sea-surface temperatures. Like El Nino, it occasionally goes through extreme oscillations which result in extreme sea temperatures, with a long list of ripple effects across continents…

In 2020, A Rocha Kenya extended the list of IOD impacts.

It all started on 9 Feb 2020, when a group of volunteers carrying out the annual waterbird count spotted large flocks of small waders flying and landing on the water offshore from Diani beach, in typical Phalarope fashion. Phalaropes are rarely seen on the coast, and when found, are usually seen in single individuals or small numbers (only 8 sightings ever recorded onshore in Kenya). Puzzled and excited, the team hopped on a fishing boat to confirm the observation. A few minutes later, 2-3km from the coast, they found themselves surrounded by 5 to 7 large groups and many more smaller groups of Red-necked Phalaropes, with an estimated total of 3000 birds! The highest count for the East African Coast by a long way! 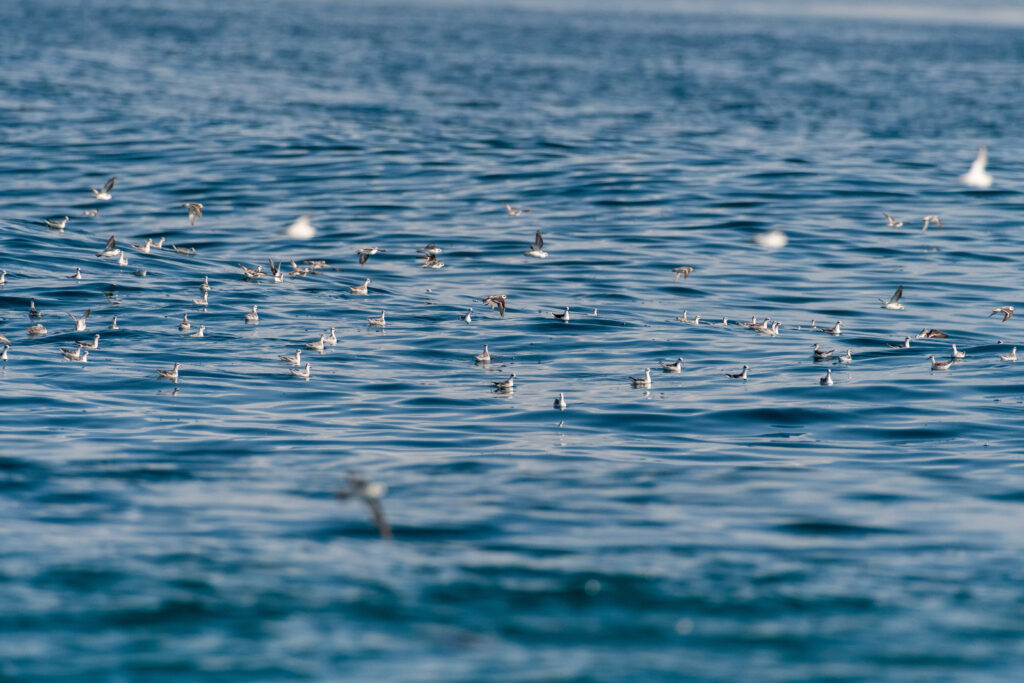 On 9 February, we spotted several large flocks of Red-necked Phalaropes just past the coral reef on Diani Beach – estimated to a total of 3000 birds. This is an exceptionally high number for this species in Kenya.

This exceptional observation was followed by multiple sightings of Red-necked Phalaropes at other locations surveyed during our waterbird counts, this time in smaller numbers: Tana Delta (1) , Mida Creek (1), Temple Point (1) and at a small Vlei just next to the Mwamba centre (2). 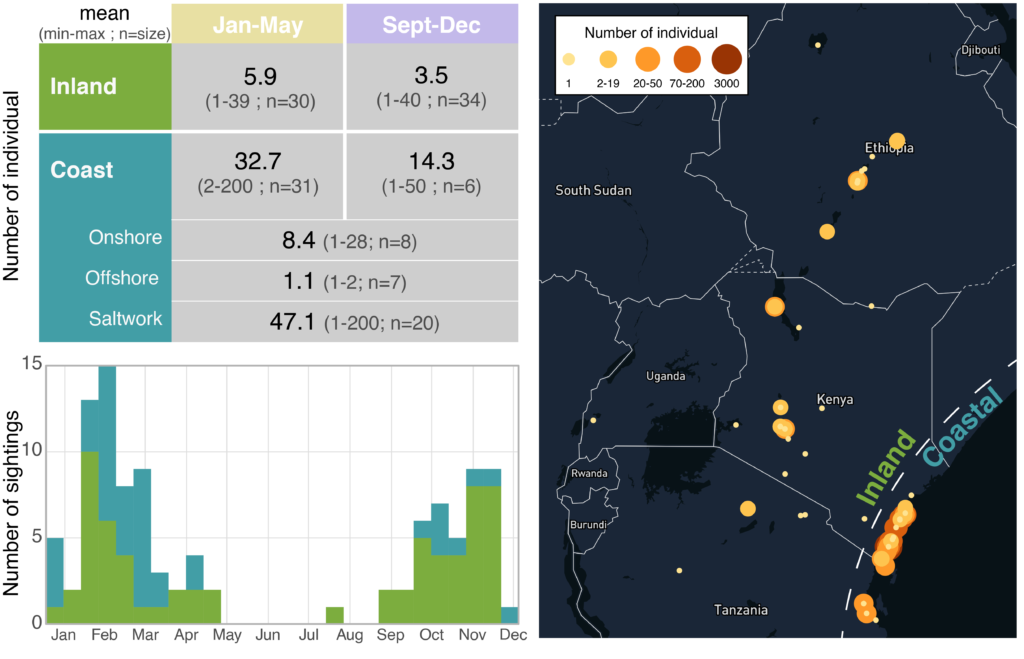 An overview of historical sightings of Red-necked Phalaropes in Kenya. 46% of all sightings are of single individuals and 78% are of less than 10 individuals.

What could explain this unusual influx of Red-necked Phalaropes? What was pushing these birds, usually found far offshore, towards the coast?

Waders by nature, Red-necked Phalaropes display the wintering behaviour of a seabird – travelling long distances and spending months at sea. They have been reported in places rich in surface-level plankton, which is re-distributed from deeper ocean layers through the process of upwelling. This process is itself directly influenced by ocean currents… which leads us back to the Indian Ocean Dipole! We took a closer look at the IOD oscillations at that time, and sure enough, this year featured an extreme IOD event, during which the warmer phase was exceptionally high. This resulted in the absence of upwelling, which meant Phalaropes did not find their usual food in their usual spots.

To verify this hypothesis, we looked at satellite imagery of Net Primary Productivity, a measure of planktonic activity. As you can see in the map above, NPP was considerably lower in 2020. In addition to satellite imagery, we used historical sightings and results from past tracking studies to paint a full picture of Phalaropes on the coast of Kenya and contextualize our sighting. We summarize these findings in a paper recently published in Ostrich Journal of African Ornithology. 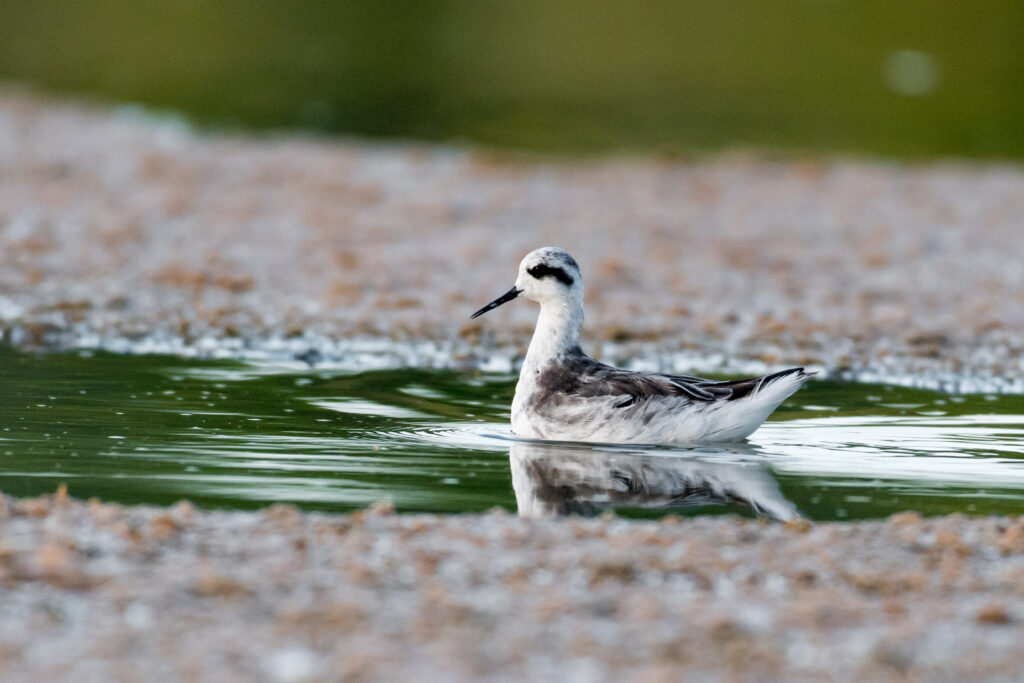 Red-necked Phalaropes were spotted several times along the Kenyan coast in February 2020, including in a small Vlei just next to the A Rocha centre!

In regular years, Red-necked Phalaropes move to the East African coast in the second part of their winter (January–February) to benefit from the upwelling forming in this region. In 2020, due to the extreme positive IOD and reduced upwelling, the Phalaropes did not find their usual food and therefore resorted to moving closer to the coast, often at river estuaries where food is more readily available.

This is a small example of the influence of ocean currents seabirds. As extreme events are expected to become more frequent with climate change, more research must urgently be done to understand how these events affect seabird populations. 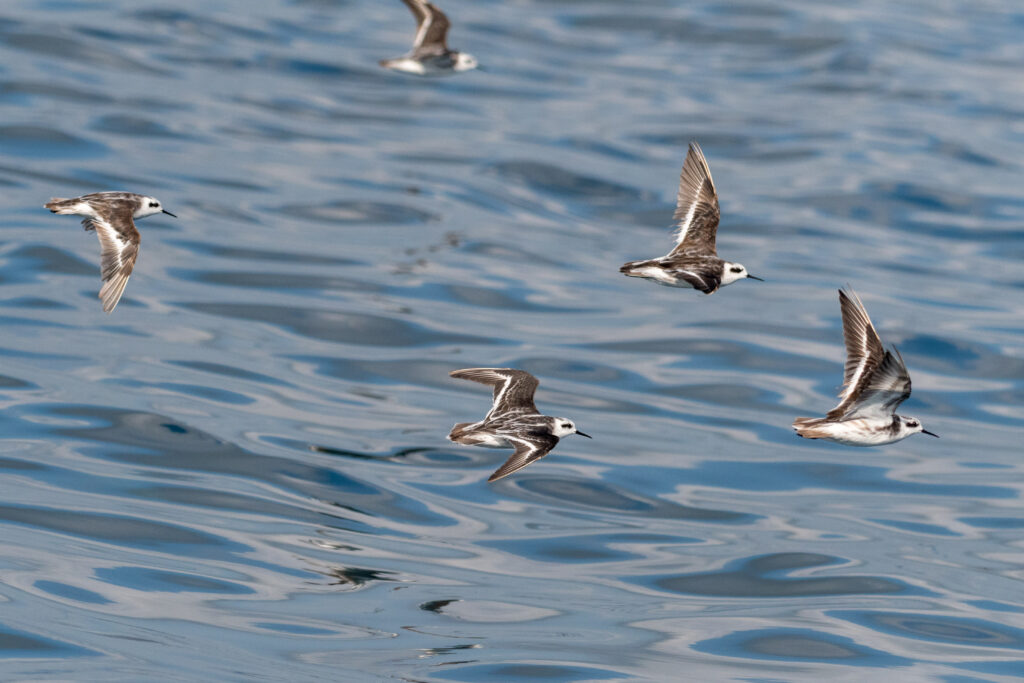 The Red-necked Phalaropes wintering off the coast of Kenya belong to the Palearctic population. Little is known about their migratory movements due to the difficulty of observing this species offshore.

Volunteer with usDakatcha Forest CampaignDonateStay with us Sign up for our E-News
White Stork from Poland electrocuted in north-western Kenya 20th January 2022
What do Australian wildfires and Red-necked Phalaropes on the coast of Kenya have in common? 14th December 2021
Latest news
Welcome to Kuvuka! 8th December 2021
A story of hope. 12th November 2021