What they value, they will preserve

A Rocha Kenya continues to hold a week long, yearly camp for the ASSETS beneficiaries and this year was no exception.

A bright Tuesday morning, April the 17th, a team of five headed by Festus Masha, our community conservation coordinator, left Mwamba Field Study Center for a two hours drive to Kaembeni, Kilifi county, for the ASSETS camp 2018. ASSETS is the Arabuko-Sokoke Schools and Eco-Tourism Scheme that cares for both children and environment.

Bogamachuko Primary School was the first center the staff landed in and spent the first two nights;it was fun and quite a memorable experience for them, followed by other stations at Malanga, Nyari, Mijomboni and Mida. 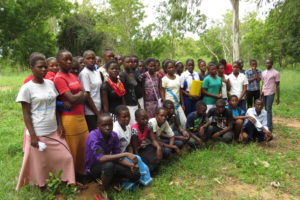 All in all 90 students were brought together for days of fellowship and fun, focusing especially on environment and on the progress of their studies.

Decision makers play a key role in conservation. Thus the students were encouraged not only to care for their environment now but to aspire to be part of those who ‘call the shots’. This means they have to study, work hard and smart in their studies.

Creating awareness being a key part of camp, it also brought parents on board. These parents and students live around the Arabuko Sokoke Forest and Mida Creek and most of the local people have no idea of the rich biodiversity surrounding them, hence they do very little to protect or preserve it. At the camp they got to know more about the very valuable nature resources in their area, and the students also got guidance for their studies and careers. What they value, they will preserve.

Having ASSETS graduates with them at the camp was an encouragement to many, since they felt that they too can make a difference. 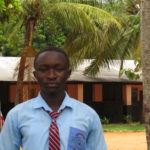 Abdul one of the ASSETS beneficiaries

16 year old Abdul Adnan, is a form two student at Mida Secondary School. He is the 9th born in a family of 11 children. Since he got into the program he hasn’t ceased talking to people both his peers and those older about the importance of Mida Creek and why the should conserve it. He hopes to be a pilot one day and also help to educate many children. He is grateful that ASSETS came in and helped lightened the ‘burden’ since his parents were struggling a lot to raise his fees. 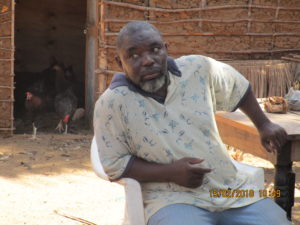 Mr.Juma right in front of his poultry house

Mr. Amina Juma lives around the creek. In the early years like most residents he went out into the forest, trapped birds to at least provide a meal for his family or sell the meat and have some money to take his children to school. Having learned the importance he resorted to poultry. He has been in the business for three years, and as we talked to him he had 150 chicken and each went for Ksh 500,– He sells his chicken to hotels around and gets money to cater for family needs. He says ’’its less time consuming since he doesn’t have to go out seeking for the meat, plus its more assuring because going out into the forest one isn’t sure they will come with anything’’. Mr Amina has been on the forefront passing on the message to others encouraging them to seek sustainable ways of bringing income. 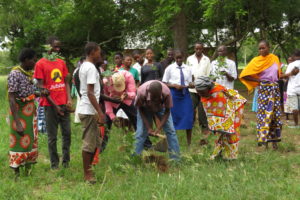 It was a very interactive week as the parents and students asked questions and go to know their roles in conservation. To crown it all, there was a tree planting session done by both the parents and the students.